Coco and The Butterfields

If anyone ever doubted the ability of music to re-route people's lives, a page from the formative days of CoCo and the Butterfields will soon turn that around.

It's 2012 in the town of Canterbury, where Tom Twyman has a plane ticket in his hand, for the journey to the new life he's mapped out for himself in Australia. Dulcima Showan, meanwhile, has just left sixth form college and is all set for art school in Dublin. Neither of them ever makes it, because by now they're in the early stages of a band that has other plans for them.

CoCo and the Butterfields have been on a steady and unmistakable upward incline since then, developing an enviable reputation for their exhilarating live shows as their inclusive, acoustic-based sound has ripened to maturity. During the ride, they've played to enthusiastic audiences all over the UK and Europe, both at their own gigs and countless festivals, as well as headlining at London's 02 Academy. They also signed a prestigious 2016 publishing deal with peermusic.

For all its elements of folk and Americana, this is admirably unconventional modern pop, and it's reached new levels of sophistication on their Monsters EP, the band's fifth in total. Featuring five new examples of Twyman's infectious and fully-rounded writing, it precedes the new album for which they have a workbook of some 40 songs to choose from.

This literally is music that came from the streets, and the band's fledgling phase as buskers in Canterbury. That taught them everything about crafting both a performance and a set list. "Tom as frontman would always gauge the audience," says Dulcima. "There would be a pretty decent sized crowd around us, by the square in the high street, and if people started to move on, you'd put a cover in, then do another of your own. It was just about reading people.

"We had a really strange, visually interesting line-up. We had a double bass, a violin, acoustic guitar, a beatboxer and a banjo, and we'd do covers of Beyoncé, or whatever had just come out, Black Eyed Peas maybe."

Half a dozen years on and now based in London, the modern-day band features Twyman and Showan stage front, ably augmented by the guitars of Rob Wicks, percussion of James Hicks, the keyboards of Jamie Smith and bassist Patrick Channon. They've been through a slow evolution in their style to arrive at a creative place where they really like the view. Dulcima proudly calls Monsters "the best we've ever sounded," and Tom adds: "This is the first set of songs that I would say represents who we are as a band. Before, a disc was more like a memento of a gig. This is more who we are as people."

Within that description lies a tangible sense of triumph over adversity, and how a negative can be deftly flipped into a positive, in the story of Twyman's tumultuous upbringing. "I had quite a difficult home life with my mum and my dad," he shares. "At six or seven, quite a lot of stuff happened, one of the results of which was that I didn't see my dad again until I was 20 or 21."

"Playing music was not frowned upon, but a career in it was never an option, and I didn't think it could be. It wasn't until I was about 21 that I ended up breaking free from that environment. Unfortunately, with that came being cut off from my entire life that I knew.

"It's difficult when you get shunned by your family and your friends," he adds with considerable understatement. "I had a very difficult reunion with my father. I met Dulcima and threw everything I had into doing this. Initially my aspirations were smaller, I thought I'd just go travelling and do music. But it wasn't until a couple of months of doing CoCo together that I realised just what this could be, and so I put down my plane ticket, and convinced Dulcima that she should forget art school and make something of the band."

Such personal detail is worth recounting because it shows that this band has truly learned from life, and the songs on Monsters emanate that worldly wisdom. "They're all about my experience with other people and the various aspects of relationships," explains Twyman, "and how that brings out different elements of your personality, whether it's your animalistic side, or your giant side which represents your hopes and dreams. That's why with our artwork, we've used different elements of the creatures to build one being."

Tom's first creative leanings were in poetry, before he ever knew a musical instrument. "When I started writing poems," he recalls, "I wanted them to be songs, but I couldn't play anything, so I would sing the poems in my head. Then a friend lent me an acoustic nylon string guitar and I taught myself to play. When she could see I was really getting into it, my grandmother bought me an electric guitar. Then all those poems, I turned into songs."

"What's also really cool," enthuses Showan, "is that when I first met Tom, he had this thick songbook, and right up to now, when we're considering album tracks, those songs are still there, which means they were good right from the start."

Dulcima's musical raising, by contrast, was through her parents' record collection. "My earliest memory of music was Enya and Pink Floyd, I would have been four or five," she says. "Then I grew up dancing to the Beatles, before moving onto more Irish-gypsy type stuff as a teenager. I was trying to be a bit hip, so I would listen to older music, but now I've opened to the contemporary scene, and listen to what's on the radio. I don't rule out any of it."

So where did that distinctive band name come from? Dulcima tells the story on Tom's behalf. "Years before I even knew him, he and two friends were sitting around talking about business ideas, and they came up with becoming male escorts for the older lady - not to do anything, just be the guy on their arm. So they said 'We've got to have fake names, then.'

"Tom's happened to be CoCo Butterfield and he joined Facebook under that name, just to be a bit anonymous. Almost by default, the band needed to be called CoCo and the Butterfields."

The name is another device to play with, in a band that does things very much its own way. "We two are the lead singers and I'm the only girl, so a lot of people think I must be CoCo," says Dulcima. "We give different people different answers. 'We're all CoCo.' 'No one's CoCo.' 'Isn't there a bit of CoCo in everyone?'" Quite simply, there will be soon. 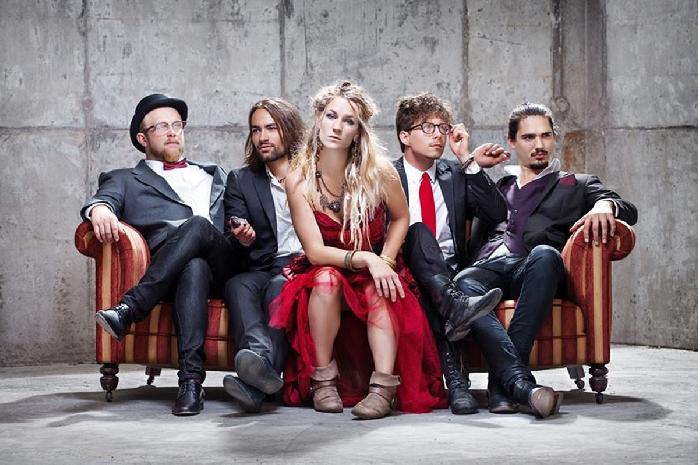