Fast-rising North London band, KAWALA are kicking off 2020 with the release of their evocative new single 'Animals', from their self-titled EP. The track was premiered last night on BBC Radio 1 as Jack Saunders' Midnight Drop.

The song is a distillation of the band's distinctive sound. Chiming guitar melodies accompany a propulsive bassline and a sparse yet driving beat, all overlaid with Jim and Dan's captivating vocal harmonies, telling a tale of a toxic relationship from the perspective of reassuring a female friend they do not need that abusive person in their life. The band have also dropped an in-studio video of them performing Animals which you can view here

"We wrote 'Animals' as a simple reference to the empowerment of escaping a toxic relationship" the band elaborate. "We tried to balance floaty harmony-based verses that represent the feeling of naive comfort in a negative situation, with more punchy choruses that create more of a sense of breaking free on your own."

Winning fans across the UK and beyond KAWALA juxtapose their upbeat melodies with a lyrical bent that reflects on the inner turmoil of daily goings on, confronting the ups and downs of modern life.

Their self-titled EP features some of the band's strongest material to date, including the contemplative 'Heavy In The Morning', thekinetic 'Who'd You Rather' and the anthemic 'Wash Away The Wild'. With each new release the band continue to develop their unique song writing style and with more new material to come in 2020 they show no signs of slowing down.

Formed in North London by then teenagers Jim Higson and Daniel McCarthy, the band are a truly exciting proposition within the UK music scene. Drawing inspiration from the likes of John Martyn Bombay Bicycle Club, The Staves, Bon Iver and Half Moon Run, the pair started writing songs together and quickly developed a close musical partnership. As the songs developed, they eventually put together a full band with friends Dan Lee on electric guitar, Reeve Coulson on bass and Ben Batten on drums.

Before their signing to Virgin EMI, KAWALA released two EPs via Mahogany, D.I.L.Y.D and Counting The Miles. These have led the band to making appearances on all the top playlists and the EPs have a combined 30 million global stream streams

They've been winning fans at radio as well with BBC Introducing making them an Artist of the Week and support coming from Jack Saunders, Huw Stephens and Annie Mac (Radio 1).

Live the band have sold out shows across the UK and continue to build a loyal following. In October the band embarked on their biggest UK headline tour to date, culminating in their biggest show to date at London's Islington Assembly Hall. Last summer they also played high energy festival sets at Barn On The Farm, Standon Calling, Leopollooza, Wilderness and at Reading Festival, where they opened the main stage on the Friday.

As well as new music to come in spring the band will be hitting the road again in 2020. They'll be playing their biggest headline tour to date during April and May, taking them to the Czech Republic, Austria, The Netherlands as well as a full string of UK dates, ending at Camden's legendary Electric Ballroom in London. They'll also be touring Europe with some of their musical heroes as they set out with Bombay Bicycle Club in March. As if that wasn't enough they're performing a stripped back set at Tom Walker's BRIT Awards/Warchild show at Omeara on the 14th February and they're hitting the festival circuit this summer with sets at Live At Leeds, BScene and Latitude with more to be announced. 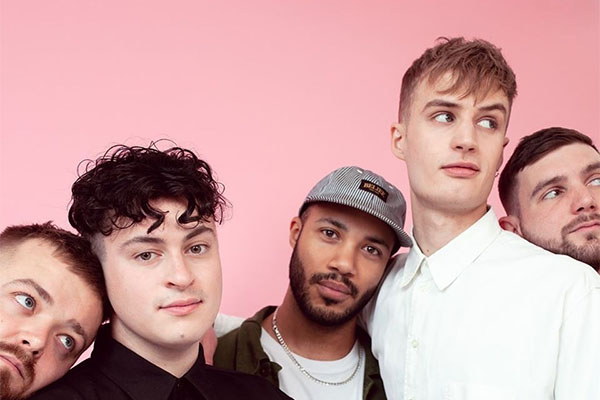