released as a single at the same time and accompanied by a low-budget, perfectly judged video that

for the band’s live shows worldwide.

classics along the way. And expect some special surprises that hint at the band’s next direction!

Delorentos’ determined rise has been a wonderful (and, at times, tortuous) chaos – break-ups, labels

collapsing, reformations and critical awards, worldwide tours and packed houses. Throughout the 4

every step they take. 5 studio albums (and one acoustic album) have seen them achieve critical

acclaim and 5 consecutive Top 10 Chart Positions in Ireland. 100s of live shows - from Mexico City to

Munich, Moscow to Madrid, Memphis to Milan (and all the other letters of the alphabet inbetween) -

have seen them thrill audiences the world over with electric and acoustic shows, and they’ve loved

(nearly) every minute of it!

advertising campaign. In a world where so much emphasis is placed on “brand new” they continue to

revel in writing albums and playing live shows that are ever more passionate, raw and exciting! With 5

for the next challenge! 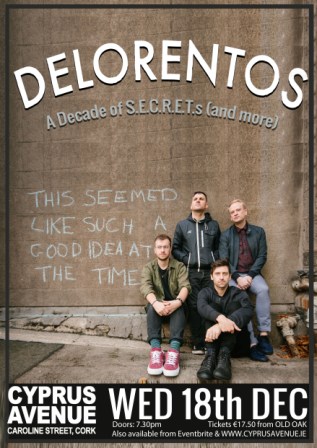